Valley Falls Farm was designated as a local historic property by the Town of Vernon in 2006. The Valley Falls area is also on the National Register of Historic Places. The farmhouse was contructed about 1850 during the ownership of Anson Lyman. The house is a vernacular Greek Revival house, one and one-half stories tall, with ells at the rear and west sides. The main block of the house faces south with the primary ridge parallel with the façade. The structure rests on a granite foundation and is post and beam frame. Siding is wood clapboard; trim is simple, square stock. The west ell features a porch with turned posts, square balusters and sawn brackets at the posts. The large windows currently have a two over two sash, and were replaced about 1910. The Friends intend to replace the four front two over two windows with six over six wood frame, which is typical of an 1850 structure. The entry features wide pilasters and a paneled wood door. The Valley Falls Barn is a late timber frame structure, with all of its timbers, braces and lumber cut with a circular saw. The gambrel roof style is the most common in the last quarter of the 19th century and the first two decades of the 20th. The overall form of the main floor of the barn is a very traditional one from the middle of the 19th century. All of this suggests a broad date range of 1875 to 1920 for the building –possibly leaning towards the earlier of the date range. The gambrel roof of this barn allowed for a very large amount of hay storage in its upper levels, though much of the framing and scaffolding for this has been removed. There was a hay fork or “horse Fork”, suspended from the ceiling so that hay could be hoisted up from the main center drive to this upper storage area. At some point the purlin tie-beams and their braces were sawn out, necessitating the nailing-on of cross-timbers to help compensate for this change. Whether this removal was done to accommodate the hay fork, or for other purposes is uncertain.

The main floor of the barn consists of a center drive with only one entrance (these barns could sometimes be driven through). The east side of the barn (to the left as you enter) was almost certainly originally an isle for hay storage, with a grain room at its near north-end, which could possibly be a later addition. The west side of the barn also has an enclosed room at its near north-end, possibly having served as a tack room for horse harnesses and related equipment, and may well have been a later addition to this space as well. The remainder of the west side was originally a stable area, as evidenced by the extensive chew marks on the wall nailers around the perimeter of this area. In a typical barn plan, this would have been stables for milking cows, along with heifers and other cattle. No evidence of other subdivisions of this area is readily apparent. After a milking stable was set up in the basement, it is possible that this area became a horse stable. It is worth mentioning that the lack of stable windows upstairs is unusual, and suggests that the siding on at least this side of the barn was replaced at some point. Otherwise this would have been a very dark work space prior to the invention of electric lights.

The milking stable in the basement may have co-existed with the milking stable above, though it is more likely that at some point the milking stable was moved from its original location upstairs, down to the basement. At this point the upstairs was changed into a new use, not clearly documented by physical evidence. The downstairs milking area has all of the hallmarks of an early 1900s dairy production area, with a concrete floor, manure gutters (since replaced with a new concrete floor), and lots of whitewash. The rustication, or scoring of parging on the walls to resemble stone blocks, is a very interesting detail. Adjacent to the basement milking stable (which has been converted to an ADA accessible rest room), but walled-off, are two dairy production rooms, one of which contains a cork-lined cooling tank that utilized flowing spring water (some pipes still survive). In the larger of the two rooms is an early water heater (ca 1890s), and a large concrete floor with a drain gutter in it. A pass-through window provided access to the road for the removal of milk cans or other products from this space. These rooms may well have been only for liquid milk handling, or some part or all of the cheese making process may have taken place here. In any event, these rooms are somewhat rare survival evidence from the early days of the 20th century dairy work. The stable/carriage barn, is the most striking and the largest of the six structures on the farm. It sits proudly near the crest of the hill overlooking the rest of the property. The most unusual exterior feature is the windowed ‘ball and point’ cupola with six over six windows.
The 1 and ½ story building was constructed during ownership of Hans Munchow and his wife Henrietta Cassin Munchow between 1910 and 1913. Munchow was known to take great pride in his team of fine horses, which he regularly pranced through the streets of Rockville.

Much attention to detail and quality was lavished on the construction of the stable. It has a shallow-pitched roof and widely overhanging cornices and rakes, vertical beadboard siding with wide flat trim. Sliding double doors provide access to the stables. The interior walls, including the horse stalls, are finished in matchstick board. The stalls even have custom-worked wrought iron hay feeders. It is interesting to note that the Munchows also made substantial upgrades to the bank barn directly across the street. A lintel on the barn has a date of 1911.

During the 1960’s the hayloft of the stable was converted to a tavern-type room. Many stories are told of the good times that were had there by the Darico family in that era of this building’s history. Today, the room is used in the summer for our Board meetings (minus the tavern accoutrements!). As to it’s future – we continue to plan for use of the stable / carriage barn as a museum–“The Heritage Center”– to display the many pieces of old farm equipment acquired by the Friends when the property was purchased. 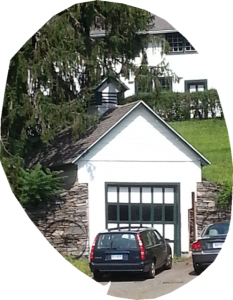 This building is located at the foot of the driveway, to the left of the woodshed. It features a gable roof, steeply pitched above an earth sheltered, stone-lined single story. It’s exposed face has wood shingles at the gable with bead-board siding below. A simple overhead door allows access to the building.

In the days before refrigeration, ice was ‘harvested’ from nearby lakes and ponds, cut into approximately three cubic-foot blocks, and stored in cold areas for use during the summer. The blocks of ice were actually cut by a handsaw. Some of these blocks were used in the kitchen ‘icebox’, the precursor to today’s refrigerator.

The ice at Valley Falls Farm was ‘harvested’ from Valley Falls Pond in the winter, and stored in this icehouse. The building is built into the hillside and thus three sides of the building are completely surrounded with the cool earth. There were also two Norway spruce trees next to the building.  One, struck by a lightning bolt in April, 2018, had to be cut down. These trees were planted to provide shade and additional cooling to the building.

We are fortunate to have the original tools that were used in the ice harvesting operation on the Farm, including the saw that was used to cut and shape the ice blocks. It is our intention to display these tools as part of our farm museum exhibition at some time in the future.

The “Manure Shed”, is the building located directly on Valley Falls Road, at the base of the steep slope below the driveway to the stable. The building features a gable roof with a steep pitch over a single story structure with concrete walls on three sides. Double doors provide access at both ends. Gable louvers allow ventilation at the loft.

This building stored pig manure from the “Piggery”, the shed located to the left of the stable at the top of the steep slope. The location of the manure shed, directly on Valley Falls Road, enabled easy loading of manure onto wagons for spreading in the fields. The unique aspect of this structure is that there is a direct underground conduit, about 6 inches in diameter, leading directly from the piggery down the slope and into the rear of the manure shed. It is presumed that this conduit enabled downhill, underground flow of manure, saving shoveling and transportation time. The piggery is located directly to the left of the stable. Pigs were raised in this small structure. It has a simple shed roof and vertical bead-board siding matching the stable and a concrete foundation. There are a small doorway openings at the base of the front wall that allowed the pigs and piglets to enter and exit from the building into their pens. An underground conduit between the piggery and the manure shed was used to transport manure from this area. The cold cellar is an intriguing structure. It’s only visible sign is the presence of a door built into the side of the hill, just behind the stable. It has concrete at the floor, walls and roof with a single door facing south. The interior is comprised of three small rooms running front-to-back, built entirely into the hillside. The rooms are ventilated with two pipes that protrude through the hillside. There is an old grinder still inside the cold cellar that was used by the Darico family to crush grapes for winemaking. Cold cellars were very common buildings on 18th and 19th century farms, and were used to store a supply of apples and root vegetables for the long winter ahead. Emma Darico, now 85, remembers the cold cellar as a wonderful building that supplied the family during the winter with apples, cabbages, potatoes and turnips. The woodshed is perhaps the oldest of the six farm outbuildings and may have been constructed at the same time as the farmhouse about 1850. A historic map in Town Hall indicates the presence of two buildings at the farmhouse site. This shed also has gable roof with unequal pitch at front and rear. This building is also in most need of repair. VGC plants in the cold frame at VFF